Domicile Remittances to the UK

Remittances to the UK Print

Firstly with the current year’s income;

Thirdly with any capital paid into the account during the current year.

If that is insufficient to match the amount remitted the process is repeated for the income, then gains then capital paid into the account in the previous year, and so forth until the amount of the remittance is matched.

There are further rules regarding the order of matching different sources of income, and that is discussed in the section on “Mixed Accounts”.

Looking at the balance within Robert’s offshore bank account, it is necessary to split this into taxed, and untaxed funds, as follows:

Where tax is paid on the arising basis, but not all of the overseas income is remitted to the UK, any balance remaining should be transferred into a separate account so that it is not mixed with untaxed overseas income, and in particular it is kept segregated from the overseas income on which the remittance basis charge has been paid (i.e. the Nominated Account). It is of prime importance that no funds on which the RBC is paid are remitted to the UK at least until all other funds have been exhausted.

Income on which tax has been paid on the arising basis may be remitted to the UK at any time without any further tax arising. This is so even where there has been an increase in the tax rate between the year for which the tax was paid on the arising basis, and the year during which the income is remitted to the UK. It is for this reason that such funds should be segregated from subsequent overseas income or gains.

Reverting to the above example, if the income on which tax is paid on the arising basis is paid into a separate account then Robert could remit this to the UK without incurring a further tax charge. This should be done before the end of the year in which the relevant income arises. Ideally to keep untaxed, and taxed income separate the interest should in the first instance be credited to an account which does not contain any previous years’ income, so that at the end of the tax year the only income in the account is in respect of that year. It should then be transferred into either an account for taxed income if tax is going to be paid on the arising basis for that year; or into the account for untaxed income if the remittance basis will be claimed. If a decision cannot be made then it should be transferred to a new account and held separately until it can be decided which account it should be transferred to. Alternatively, a new income account could be opened each year to receive the interest for that year. Whichever method is adopted, the intention should be to segregate income which will be taxed on the arising basis from income taxable on the remittance basis as this is likely to reduce the tax payable when some of the income is subsequently remitted to the UK.

If Robert had kept separate accounts for taxed and untaxed income he could have remitted funds in the following manner:

The above example is a very simple case. In practice tracking all cash movements is likely to require a fair degree of analysis work.

Ideally, for the years Robert claims the remittance basis, he should leave the income to accumulate offshore, or spend it offshore, and if he requires funds in the UK, he should remit clean capital to the UK instead. (See section on Keeping Capital Clean below.)

Where overseas income is remitted here by a non-UK domicile who is taxed on the remittance basis, the remitted income does not benefit from the reduced rates of tax generally applicable to savings income but is charged at the normal tax rates. In particular, it should be noted that dividend income is taxed at the full rates and does not benefit from the rates of tax applied to dividends paid by UK companies, or paid to individuals taxed on the arising basis.

Where sale proceeds of an asset on which a capital gain is made are remitted to the UK, the whole of the gain is treated as being remitted here in priority to any original capital used to acquire the asset. The purchase and sale of assets has to be tracked to enable a calculation of the amount of gains within the proceeds of a disposal which are subsequently remitted to the UK.

The diagram below indicates how various sources of income and gains should be segregated from the original capital, and from each other, to ensure that different categories may be remitted to the UK in the most tax efficient manner. 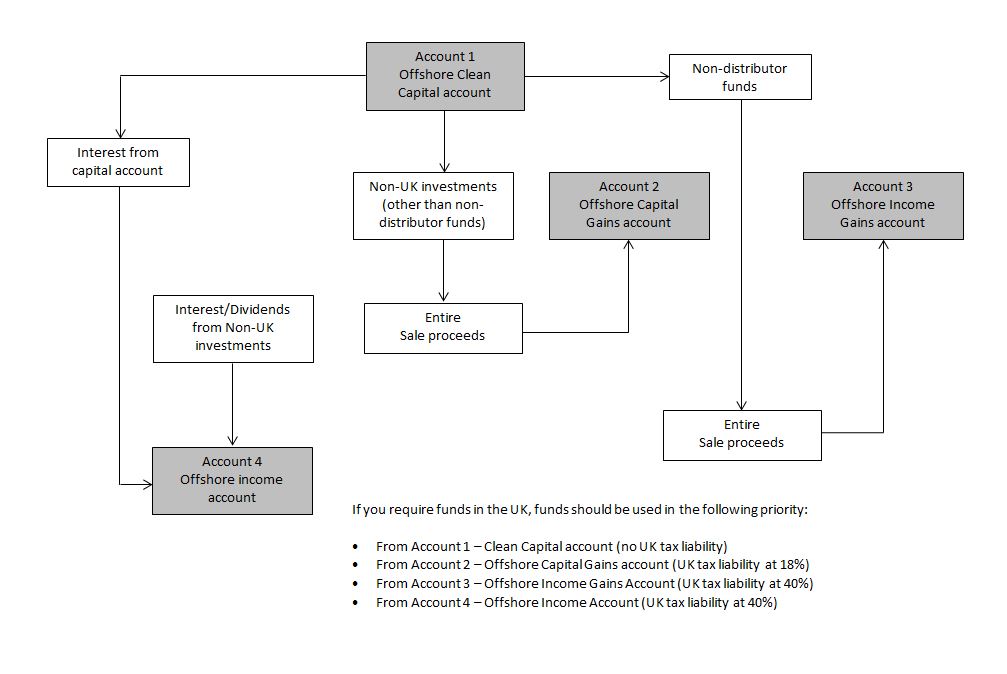 This tax planner is for general guidance only – action should not be taken without specific advice.

This tax planner does not take account of Scottish or other devolved government changes to the standard UK tax. Should you require further information, please contact us.